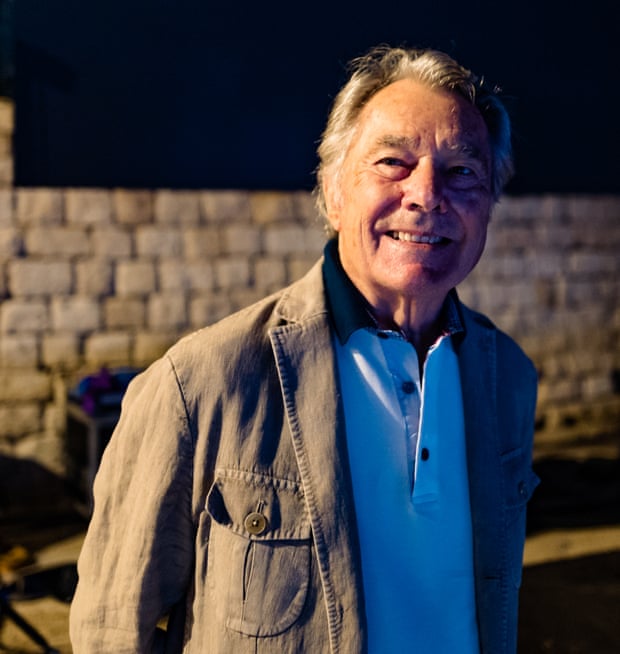 Now 86, Renato Casaro is one of the world’s most influential poster designers, best known for his classical, windswept, airbrushed canvases: heady reminders of the pre-digital era. His style turns matinee idols into Michelangelos, from Stallone to Schwarzenegger, Costner to DiCaprio. His posters are unabashed theatrics, stuffed with sweaty biceps and heaving bosoms, which transport the punter outside the picturehouse to a thrilling third reel.

Born in Treviso, Italy, in 1935, as a boy Casaro would visit his local cinema every day in the hope of taking home posters of films whose runs had ended, so he could try to reproduce them. In his teens, he struck deals with the owners: free tickets in exchange for painting their walls with huge original posters. At 18, he joined Studio Favalli, the design centre of Rome’s film industry, before opening his own art studio three years later.

His earliest mentor was the flamboyant mogul Dino De Laurentiis, who first commissioned him to produce the poster for John Huston’s colossal melodrama The Bible (1966). The huge billboard that hung on Sunset Boulevard for months was an effective calling card for Casaro, who for decades put in 12-hour days, seven days a week, sometimes forced to finish a poster in one sitting, so great was the demand.

De Laurentiis took Casaro’s art seriously, and ensured he was as embedded in each production as possible, often putting him up in a lavish hotel suite so he could draw while visiting a film’s set. About to board the plane to fly to London where Flash Gordon was shooting, Casaro was tasked by De Laurentiis to bring with him a suitcase full of yellow peppers, those then available in the UK being of insufficient quality.

Other repeat collaborators included Sergio Leone, David Lynch, John Huston and Bernardo Bertolucci, with whom he produced some of the most recognisable film art of all time. By the end of the 20th century, the popularity of his style seemed to have waned, as computer-generated posters became the norm. Then, three years ago, he was coaxed out of retirement by Quentin Tarantino to create posters for fictional spaghetti westerns in Once Upon a Time in Hollywood. In his own words, Casaro gives us a tour of some of his key works.

Dino De Laurentiis was a genius at discovering new talent. This film was Burt Reynolds’ breakthrough, and a young Ennio Morricone did the soundtrack.

The director was Sergio Corbucci [best known for Django and The Great Silence], who always made tough movies – so the artwork had to be tough and strong, too. Publicity agencies didn’t exist in Italy at this point so I would be my own art director and in control from the idea to the final image.

Quentin Tarantino loved this poster: lots of action, lots of movement and a really strong image.

When I got a call from the production manager on Once Upon a Time in Hollywood, I was told Quentin wanted some posters in that same 1960s style. It was a wonderful surprise, as I’d retired.

Tarantino sent me a few photos of Leonardo DiCaprio to study his character and I had to paint him in various fake 60s spaghetti westerns.

The bitter pill for me was that I didn’t get to do the main poster.

My process has never changed much. I speak to the producer or director and give them several sketches and they choose one or two.

Solaris was an easy one to do. Unfortunately, I never met Tarkovsky himself.

Another De Laurentiis film. I wanted Ming to be at the centre of the poster: for the image of the villain to contrast with that of the heroes.

De Laurentiis discovered Arnold Schwarzenegger when only bodybuilders knew his name. When I visited the set in Spain, I immediately knew he was going to be the perfect Conan and have a big career. Schwarzenegger was the perfect man to paint. He had a tough expression. His face was like a sculpture. It was a real pleasure for me – I have always had a weakness for heroes.

How did I end up working on a James Bond movie? The train was passing and I jumped on. This poster was made in collaboration with Daniel Goozee. He painted the characters; I did the action and scenery to try to tell the story of the movie.

Of all the directors I have worked with, Sergio Leone was the best collaborator. We were the perfect couple: one heart, one soul. This was a challenging project. The poster was for worldwide use and I was experimenting with a new style at the time, to reduce the story to an extract. I decided to have the four main characters [Robert De Niro, James Woods, Joe Pesci, Burt Young] with golden faces as a symbol. Leone was thrilled at the sketches and so were the distributors, but someone objected to the fact there were no women. To which Leone replied: “Whenever there are powerful-looking men wearing smart suits, behind them there is always a woman.” So my poster stayed.

One of my favourites; a great study of the characters. One of the actors was Silvana Mangano, who was married to De Laurentiis, who produced the film. He wanted me to place her in an important position on the artwork, and luckily this was possible without destroying the composition. Compare this with the posters of the movie released recently …

Stallone gave me the freedom to interpret all the images of Rambo I had as I wished. All I had to do was make him look like a hero. He was so excited when he saw the finished thing. He became a big fan of my work and sent me a dedication saying my work had entered his soul. Every actor has something special; the point is to capture their personality.

I created two versions for Kevin to satisfy different markets. One was a storyteller version, profiling Costner and the Indian, which was mostly used in Germany. The other, used in Italy, showed him wiping his face with paint, to show he identified with the Indians. It’s a real favourite.