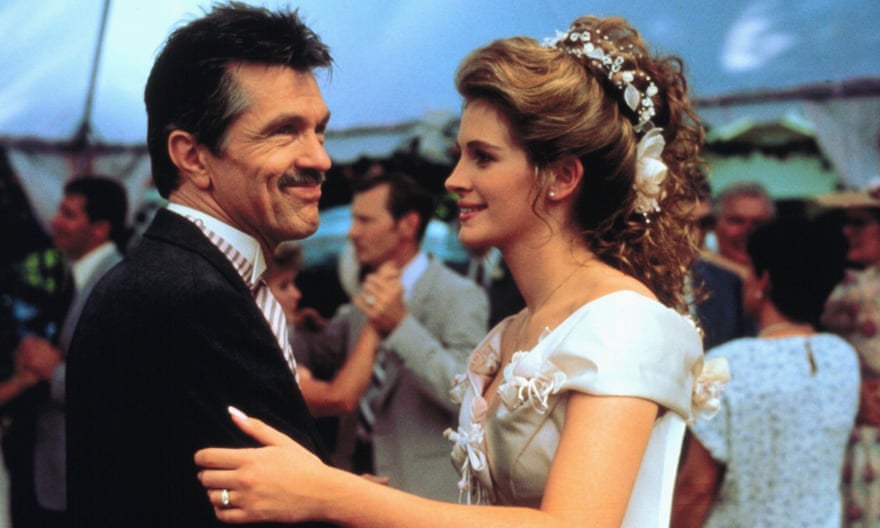 Julia Roberts got flak for her Irish accent (an Irish friend says “she gets away with kinda sorta sounding a bit Irish-ish”), but it’s not her fault this housemaid’s-eye view of the Jekyll and Hyde story is a dud. I blame dreary directing by Stephen Frears and John Malkovich’s monotonous performance as the two-faced doctor.

Spoiler: no one dies in this romantic whimsy about a wealthy leukaemia patient who falls for his working-class carer. Of course he does! It’s Roberts looking like a pre-Raphaelite muse! Director Joel Schumacher ignores the ethical ramifications of this setup, but fashions it into a visual treat for Roberts fetishists.

Brad Pitt plods around Mexico in search of an antique pistol, but forget him, because the best scenes in this misfired road-movie-romcom-thriller are about Roberts, as his disgruntled girlfriend, bonding with the gay hitman (James Gandolfini on top form) who kidnaps her on her way to Las Vegas.

Roberts goes head-to-head against a grandstanding Meryl Streep, but holds her own and nets her fourth Oscar nomination as a member of a horrible family reuniting in Oklahoma when the alcoholic patriarch goes missing. Tracy Letts adapted his own stage play featuring endless, tedious truth-telling around the dinner table.

Roberts plays a wife so desperate to escape her abusive, towel-tidying husband that she fakes her own death and moves to Iowa, where she meets a nicer chap and learns to wear baggy jumpers. This domestic violence thriller with a slasher movie vibe is arguably the acme of Julia’s baggy jumper phase.

Roberts made her breakthrough in this likable female coming-of-age indie about three Portuguese-American teens working in a pizza parlour in a Connecticut seaside town. Annabeth Gish and Lili Taylor are both wonderful, but it’s hard to take your eyes off Roberts, who has the teeth of a beautiful basking shark.

So you think you can resist Dakota Fanning adopting a piglet, or Oprah Winfrey as a talking goose? Think again. As the voice of the eponymous spider, Roberts radiates barnyard wisdom in this live-action version of EB White’s children’s classic, and I defy you not to bawl your eyes out.

Ryan Murphy’s film about the Aids crisis in 1980s New York contains all the speechifying you’d expect from an HBO adaptation of Larry Kramer’s play, but still hits the spot. Roberts serves up a shattering display of frustrated rage as a doctor collating information about the mystery virus killing her patients.

Roberts and Clive Owen play rival corporate spies in this globe-trotting romcom-cum-caper movie, Tony Gilroy’s follow-up to Michael Clayton. Straighten out all the plot twists and chronological juggling and you’re left with less than meets the eye, but there are worse things than watching two good-looking actors flashing insincere smiles and having sex with each other in glamorous surroundings.

A 10-year-old boy with a rare facial disfigurement starts school, where he has to learn to make friends and avoid bullies in the sort of heartwarming gush where you start off cynically sneering, but end up blubbing. Jacob Tremblay nails the central role, with Roberts so beautifully supportive as his mum that you wish she could mother you too.

Roberts is at her most Bambi-like as a law student targeted by assassins after stumbling across a not-very-interesting conspiracy in this John Grisham thriller. Denzel Washington, who reportedly nixed any hint of interracial romance, plays a reporter who helps her run away from hitmen. Julia wears at least one baggy jumper, but some Hitchcock-style flirting would not have gone amiss.

Mike Nichols’ final film stars Tom Hanks as a real-life Texas congressman who in the 1980s formed a sneaky alliance with a maverick CIA man and a rightwing socialite to supply arms to Afghan freedom fighters. Roberts is formidable in crimped blond curls as this prototype Trumpette, declumping her mascara with a safety pin while rattling off facts about surface-to-air missiles.

Roberts has a ball playing a classic femme fatale in George Clooney’s directing debut, adapted by Charlie Kaufman from the mythomaniac memoirs of Chuck Barris (Sam Rockwell), an American gameshow host who claims to have moonlighted as a CIA hitman. Julia and Sam’s relationship resolves itself in one of those classic blunders – a poisoned coffee cup switcheroo.

Sex worker meets millionaire on Hollywood Boulevard; he pays for her to go frock-shopping; they fall in love. That this pernicious tosh works as romantic comedy is entirely due to Roberts, in the role that shot her to stardom, and Richard Gere, visibly wowed by this winsome popsy in thigh-high boots. She walks like a truck-driver – but then so did Garbo.

She’s a famous movie star; he runs a bookshop just off Portobello Road. Like Richard Curtis’s other screenplays, this is more a series of loosely connected episodes than a developing narrative. But some of the episodes are fun, and Roberts (skilfully underplaying a version of herself) and Hugh Grant are both delightful in this prosecco bubble of a romcom.

Our Lady of the Concave Stomach plays the skinniest food writer in cinema history, but manages to keep us onside despite reprehensible behaviour as she tries to sabotage her male buddy’s engagement. Painful jealousy gets a frothy camp makeover, three Burt Bacharach singalongs, seven pratfalls and a zinger of a last line from Rupert Everett as Julia’s gay chum.

Roberts flaunts carefully calibrated cleavage as a foul-mouthed single mom who fights for the little people against corporate America in this true-life legal dramedy that won her the best actress Oscar. Director Steven Soderbergh simply winds her up and sets her loose; Erin is not always nice (not least to other women) but it’s her abrasiveness that makes her such a blast to watch.