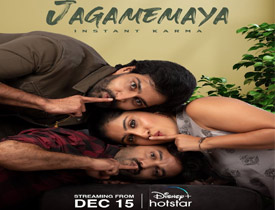 Anand (Teja Ainampudi) is a fraudster who blackmails people for money. One day, he meets Chitra (Dhanya Balakrishna), who lost her husband Ajay (Chaitanya Rao) in a car accident. After a few days, they get married and Anand comes to know something scary about Chitra. What’s that, who is Chitra and what she did next forms the rest of the story.

Actress Dhanya Balakrishna is a good actress and it has been proven yet again with this web movie. Her performance in the first half is quite opposite to that of in the latter part. She balanced the role with her subtle performance.

Budding actor Teja Ainampudi is good in his role. His comedy timing is his biggest asset and it somehow made the film a watchable one. Chaitanya Rao’s character is also important in the film and he is just fine in the role given.

The story is one of the biggest drawbacks of this OTT movie. Director Sunil Puppala fails to make Jagame Maya an engaging thriller. The film could have been made intriguing by injecting twists and turns in the story but unfortunately, they were missed in the film. Thus, the film lacks the punch and turns into a mediocre film. One can easily predict the proceedings of this thriller, which failed big time to enthral audiences.

Dhanya Balakrishna is decent in her role but she should have been given more space to perform. Unfortunately, her performance goes in vain because of the poor story and screenplay. Prithviraj’s character should have been written in a better manner to make the film more thrilling. The rest of the characters are not even worthy to mention.

A better story by Sunil Pappula and an engaging screenplay by Ajay Sharann Addala could have made Jagame Maya a decent thriller. But, both of them failed miserably and made the flick a boring fare.

Music, editing and cinematography are the key aspects of a thriller but the men behind them failed miserably to give the best output. Even though the runtime is less than 2 hours, the flick still makes one feel bored with a pale story and dead slow narration. Also, the production values are pretty average.

On the whole, Jagame Maya is a non-engaging thriller that lacks the punch to enthral audiences. Dhanya Balakrishna and Teja Ainampudi are neat in their respective roles. The OTT film almost lacks everything to make one glue their eyes to the screen. You can skip it and look out for something else to enjoy the weekend.